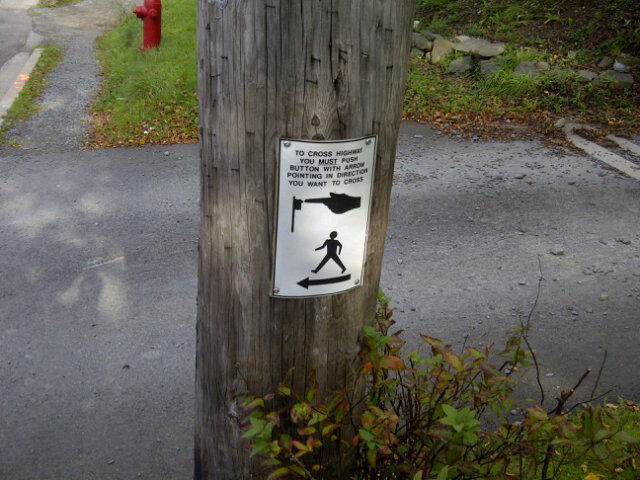 I woke to the sad news this morning that yet another pedestrian was killed in an accident in a marked crosswalk last night.  It's another reminder of why better education and enforcement is needed.

In my last blog post, I talked about some of the other recent crosswalk accidents in Halifax, some of the legal responsibilities of drivers and pedestrians, and made a few suggestion as to what could be done to improve crosswalk safety from a legal standpoint.

In this post, I talk about the government officials in charge of crosswalks.  They have been back in the news due to the recent decision by the traffic authority to remove a number of marked crosswalks in the HRM.   The removals, and the lack of notice to the public prior to removal, have resulted in a backlash in the community.  This raises questions about who is responsible for crosswalks, and how they make their decisions.

Why are marked crosswalks important?

As stated in my last post, the Motor Vehicle Act ("MVA") provides for both marked and unmarked crosswalks, and provides that basically every intersection has a crosswalk, whether it is marked or not.

Who is in charge of creating marked crosswalks?

Under section 90 of the MVA, the "traffic authority" has the power to establish crosswalks with markings and other devices at intersections "where, in his opinion, there is a particular danger to pedestrians ... and at such other places as he may deem necessary."  In other words, the traffic authority has broad and pretty much unfettered discretion as to where to establish marked or signalled crosswalks, although danger to pedestrians appears to be the overriding concern.

Who is the traffic authority and who does he report to?

In this case, The Minister of Transportation, Maurice Smith, has made clear that he considers decisions regarding crosswalks to be a municipal matter and will not interfere.  However, MLA and former councillor Andrew Younger makes the point that the province is certainly able to amend the MVA to create a process that allows for more citizen input.  I would point out that the province could also amend the MVA to limit the traffic authority's discretion, and make clearer what factors he should consider in deciding where to place crosswalks.  I would argue it would also be open for regional council to set guidelines, factors to consider or criteria for the traffic authority to apply when appointing the traffic authority.

How does the traffic authority make decisions about where to place marked crosswalks?

Residents have been critical of the decision to remove crosswalks without community input, and without regard to the needs of the community, notably in neighbourhoods with many children or seniors.  In response to the criticism, Ken Reashor, the traffic authority, suggested that decisions regarding placement of crosswalks is based on "what is safe", and not political pressure.  Indeed, safety is the only consideration the MVA requires him to consider. The authority claims he is only having crosswalks removed where they fail to meet the national standards of the Transportation Association of Canada: 20 crossings per peak hour.

The application of this standard is the result of the 2007 final report of the crosswalk safety task force, which recommended that municipalities should use a consistent approach in the installation of crosswalks "based on technical merit".  The task force also recommended that existing crosswalks be re-assessed when roads are re-furbished, and that "where existing marked crosswalks are not warranted, they must be removed due to potential safety hazards".

Obviously safety is not the only consideration.  In an interview, the HRM's deputy traffic authority, Taso Koutroulakis talks about the removals, and makes clear that not delaying vehicle traffic is an important consideration as well.

While it is possible he was selectively quoted, I notice that nowhere does Mr. Koutroulakis mention the importance of pedestrian traffic flow.  Nor does he mention the large inconvenience that may result to pedestrians by having to walk farther to crosswalks, which may prove to be an obstacle for people with mobility issues, not to mention children and seniors.  While marked crosswalks should not necessarily be placed too close to intersections, they also shouldn't be placed too far apart.

The application of the standard raises some questions about how and when crossing are being measured.  How often are HRM staff going out to take measurements, and are they catching peak crossing times, which vary from location to location?

It also raises a more fundamental question about the appropriateness of the standards themselves.  As this article by a recovering engineer suggests, standards reflect the priorities of traffic engineers, and may not reflect the priorities of the community.  Standards like the one being applied here are guidelines that are meant to enable us to achieve our priorities.  It's important we discuss those priorities, what relative weighting they be given, and not mistake the standards themselves for priorities. If 20 crossings per hour becomes the goal, instead of safety, convenience, and so forth, then we have misplaced our priorities.

It's also a reminder that traffic engineering is more art than science.  More than almost any branch of engineering, it requires engineers to make decisions based on assumptions about human behaviour, rather than scientific properties and principles.  Human behaviour is inherently unpredictable, and the law of unintended consequences applies.  We should constantly be reviewing our standards to make sure they are actually promoting the kind of safe behaviours we desire.

Where does that leave us?

I'd close with a few recommendations.  First of all, I think the lines of authority for the traffic authority need to be clarified.  Regional council needs to be given the power to remove the traffic authority as well as to appoint.  Second, either province or the council needs to set some clearer criteria or guidelines around how the authority's power over crosswalks should be exercised.  While the decision should not be political, elected representatives should be able to identify the community's priorities, and make sure those are taken into account in how the authority makes decisions.  Third, when removals are being made, notice should be given to the community, and an opportunity to present reasons why the crosswalk should be maintained.  Fourth, where crosswalks are deemed to be unsafe, enhancing safety through signals and other engineering measures should be considered instead of just removal.  Finally, as I stated in my last post, better education and enforcement is needed to make all crosswalks, marked and unmarked, safer for all users of the road.