While in Ottawa last week, I had the opportunity to visit Victoria Island, where Chief Theresa Spence is staging a hunger strike, requesting a meeting between Aboriginal leaders, Prime Minister Harper, the Governor General, and the Premier of Ontario, in order to discuss First Nations concerns regarding their treaty relationship with Canada and the Provinces.  Chief Spence is the Chief of Attawapiskat First Nation, a First Nations community in Northern Ontario that has faced more than its share of hardship, and which has become emblematic of the stark social and economic conditions facing most First Nations communities in Canada.

I did not meet Chief Spence, but I did meet some of her supporters.  I also snapped the following picture from the campsite, across the river, of the Peace Tower and the Parliament Buildings. 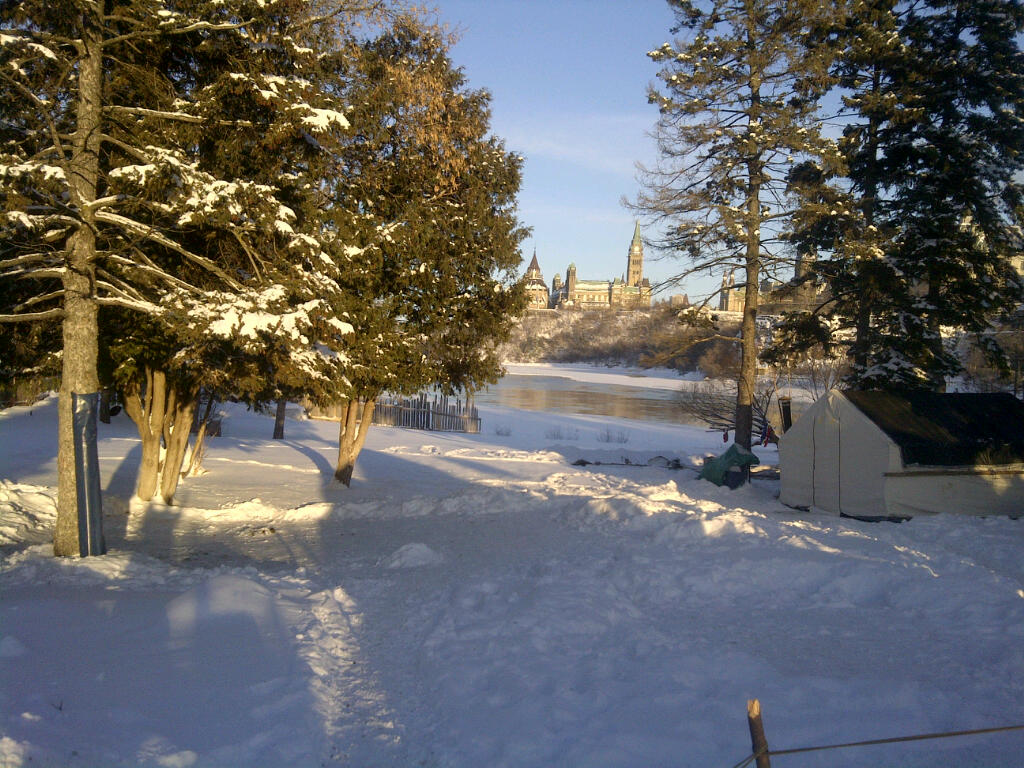 Prime Minister Harper and Chief Spence could very likely see each other across the Ottawa river, yet the reality of their respective positions could not seem to be farther apart.

Chief Spence's hunger strike is just one face of the larger Idle No More movement, a campaign which has burst into the national spotlight over the past few weeks.   What started as a series of teach-ins in Saskatchewan has quickly grown into a national (and even international) protest movement, which has included marches, rallies, flash mob drum circles in shopping centres, and blockades.  Key to the campaign has been the use of social media (with the hashtag #idlenomore) to organize protest activities and to raise awareness.  The campaign has used their website to publish a manifesto and to issue calls to action.

The catalyst for the movement seems to have been the Harper government's recent omnibus budget Bill C-45.  While the bill raises democratic concerns for all Canadians (which I discussed in an earlier post), it contains some legislative changes which are of particular concern to First Nations, among others.

First, the Bill reduced the number of rivers and lakes protected under the Navigable Waters Protection Act,from 2.5 million to 159.  Coupled with changes to other environmental legislation in the previous omnibus budget Bill C-38, this threatens to seriously undermine the environmental protection of Canada's lakes and waterways.  First Nations are particularly concerned about the impact on the environment, and their treaty and Aboriginal rights to hunt and fish.

Third, the Act amended the Indian Act to make it easier for First Nations to designate or surrender portions of their reserve land to the Crown for leasing to outside interests.  While this was ostensibily to faciliate on-reserve economic development, it raises the risk that a poorly attended community meeting could result in a small number of band members approving a designation with potentially huge impacts.

The substantive concerns with this legislation vary, and will have to be addressed in future posts.  However, in each case, one overriding concern is that the government is making sweeping legislative changes affecting First Nations without proper consultation.

Canadian law requires the government to consult with First Nations when taking action which is likely to impact on the Aboriginal and Treaty rights of First Nations.   Yet most of this legislation, which does just that, has been or is being prepared with little or no consultation.  It is this larger, unilateral attempt to re-write Canada's laws on First Nations, without any meaningful discussion with First Nations people themselves, that has so angered the grassroots and inspired the Idle No More campaign.

There has been no shortage of criticism of the Idle No More movement from mainstream media, ranging from it "lacking detail" in its demands, to some media personalities essentially accusing Chief Spence of an act of terrorism for undertaking a hunger strike.Others have deflected the criticism by suggesting that First Nations leaders need to take more responsibility for the plight of their communities.

That criticism seems reasonable on its face, but ignores a few basic facts.  First, it fails to address just how monumental the economic and social problems faced by First Nations are.  While these problems are beyond the scope of this post, they are largely a legacy of past (and even present) attempts to assimilate Aboriginal peoples, from the creation of the reserve system to residential schools and beyond.  Second, it ignores the fact that the federal government has essentially created a system in which Indian Act Chief and Council are primarily accountable to the bureaucrats at Indian Affairs, and not the communities they are supposed to represent. Further attempts at assimilation and more "accountability" to bureaucrats are not going to fix the problems they helped create in the first place.   These problems are going to require dialogue and co-operation between the treaty partners in order to solve.

More fundamentally, this criticism seems to have missed the point of the Idle No More movement.  The founders of the movement have actually taken steps to distance themselves from the Chiefs, and the movement seems to be as much a criticism of some leaders within Canada's First Nations as it is a criticism of government policy.  The sentiment seems to be that too many Aboriginal leaders have been idle in the face of government policy which erodes and undermines Aboriginal rights.

Idle No More will need to address the challenge faced by all grassroots protest movements: how to translate popular concerns and protest activity into meaningful changes and solutions which will actually improve the lives of First Nations citizens.  Idle No More will have to learn from the path of the Occupy Movement, another grassroots movement which sought to empower people, but ultimately seemed unable to translate legitimate concerns about a broken system into a meaningful programme of action, and as a result appears to have failed to achieve much in the way of lasting change.

In the meantime, regardless of the Idle no More movement's direction and demands, it is clear that one demand is not being met: the Governor General had made it clear he will not meet with the Chief, and from the Prime Minister's office, continued stony silence.
Posted by Derek A. Simon at 11:31 AM