Social media in Halifax was abuzz yesterday with the news that some popular local barbershops and salons had been told they could no longer provide their customers with a beer or other drink while they waited for a haircut. The practice  is one that a few local salons and shops have adopted, and an option that seems to be very popular with customers. One barbershop offered their customers the option of a beer or a coffee with their cut, while another would offer sample beers to waiting customers. 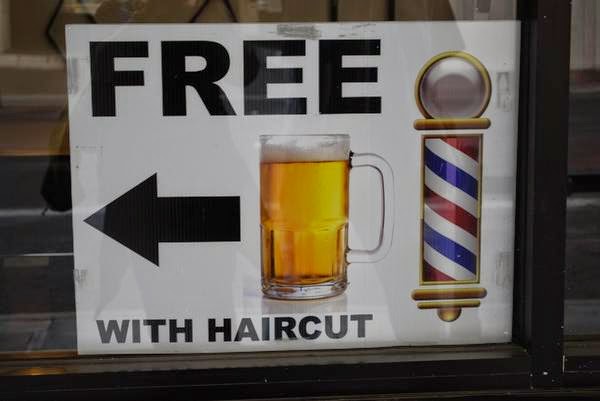 Apparently, based on an anonymous complaint, the Halifax Regional Police made the rounds to a number of shops and salons yesterday to inform them that serving drinks was considered a no-no. However, some of the shops claim that they had previously contacted the Province's Alcohol and Gaming Division, and been told that they didn't require a license, or what they were doing was perfectly legal.

News of the bust created a social media firestorm, with Haligonians asking what law the police were enforcing, and why they were hassling hardworking business owners over such a trivial matter. It was pointed out that certain other local businesses (including retailers, massage therapists, spas) have been offering a free drink to their customers for years.


The key thing to remember is that Nova Scotia's Liquor Control Act is an outdated piece of legislation informed by a prohibition mindset. Liquor is a controlled substance, and according to section 78 of the Act, it is unlawful to sell, transport or keep liquor, or even to give or consume it unless the Act or regulations specifically say you can. I personally don't agree with this approach, but that is the reality underpinning the Act.

The categories of licensed establishments under the Act are archaic, and there isn't a permit or license that really fits this situation. That leaves these shops in a bit of a no man's land.

You could argue that the drink is a gift to the customer from the shop, and covered by section 55 of the Act. But the Act also has a very vague and broad definition of what constitutes selling liquor, and a pretty broad prohibition against giving someone liquor. It would seem that the police are taking the perspective that it does apply here. Either way, there is some uncertainty in the law.

Even if they could get a license, the cost and rules around licensed establishments would make it difficult if not unworkable for these businesses.

But that begs a bigger question: why would this even be against the law? What is the harm in allowing a business to serve a single drink to a customer as part of the service they offer? I'd argue this is a pretty low risk activity, and that, in a city that has problems with more serious crimes, a waste of valuable police time and resources.

We could simply ask the police to back off, but that would be a stopgap solution.

The common sense solution, in my view, would be to clarify the law by passing a simple amendment to the Liquor Control Act allowing a business that is not a licensed establishment to give a single drink to their paying customers. They would still be subject to all of the restrictions regarding not serving underage or intoxicated customers. This should allow a largely harmless and popular practice to continue, while ensuring that appropriate rules are still in place to protect the public.

Our Liquor Control Act desperately needs an overhaul in any event. This seems like an obvious place to start.