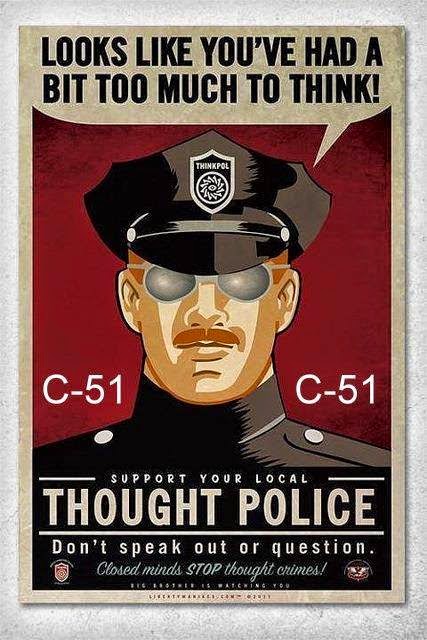 Stephen Harper is on a bit of a roll. Capitalizing on recent events, his proposed anti-terror legislation, Bill C-51 seems to enjoy widespread popular support, at least according to one opinion poll. The Liberal Party have announced they won't oppose the Bill, and it seems almost destined to become law.

Nonetheless, a number of prominent Canadians, including former Prime Ministers, Judges and Justice Ministers, academics, and even some conservative commentators, among others, have expressed concerns about the Bill, including that it allows widespread sharing of citizens' private information within government, lacks sufficient oversight and accountability for security agencies, and potentially infringes certain fundamental freedoms, including freedom of speech and protest rights.

I share many of these concerns, and want to focus in on two aspects of the Bill that I find particularly troubling:

First, the Act is is no way limited to stopping or disrupting terrorism. It allows government agencies to gather and share information in respect of "activities that undermine the security of Canada". It gives a broad, open ended list of such activities, which includes terrorism, but also includes "interference with critical infrastructure". The only thing it excludes is "lawful advocacy, protest, dissent and artistic expression".

This allows our security agencies to spy and exchange information (with very little oversight) about Canadians who are taking part in all kinds of activities which are an accepted and important part of life in a democracy, including strikes, labour disruptions, and other types of pickets or protests, which are protected by our rights to freedom of speech and freedom of assembly


The carve out for "lawful" activities is simply not broad enough to protect those rights. There are all kinds of ways in which an otherwise peaceful protest can be deemed "unlawful" including a protest march that fails to get the proper municipal permits, or which inadvertently trespasses on private property. And there is often uncertainty about the lawfulness of protest activity. One group I work with spent two years prevented by a court order from protesting against a particular power project: the Court of Appeal ultimately threw out the order because it had no legal or factual basis. Still, during that time, their activities potentially fell under this new legislation, and could have subjected them to spying and other heavy handed measures. This kind of broad power will have a chilling effect on even the most peaceful protests, because of the possibility that any protest you take part in could be deemed unlawful, and result in Canadian security agencies spying or sharing private information about you.

The carve out for protest and advocacy is very different than the existing carve out in the Criminal Code, which exempts any advocacy or protest that isn't intended to cause serious harm or risk to persons or property. If the goal is to target terrorism, then security agencies should continue to be restricted to spying on those individuals and groups that are actually threatening real harm to Canadians and their property, not merely any group that happens to cause some inconvenience or disruption as part of a peaceful protest activity.To do otherwise is to subject law-abiding Canadians to the powers and scrutiny of a police state merely for exercising their constitutional rights.


Second, it creates a new offence for "advocating" or "encouraging" terrorist offences, whether they take place in Canada or abroad. The problem with this is that the definition of terrorist offences in the Criminal Code is already quite broad, and can include any kind of armed struggle, including one against an unjust government. As has been pointed out elsewhere, if this law had existed at the time, Canadians who expressed support for Nelson Mandela and the ANC during their armed struggle against the apartheid government in South Africa could have been considered guilty of "advocating terrorism". Similarly, anyone who expressed support for the Hungarian people in their uprising against communist rule in 1956 would have been guilty under this law as well. No matter what side of the political spectrum you are on, the fact that you can no longer openly voice support for people who are fighting an unjust or despotic government without fear of being convicted is a gross infringement of freedom of speech.

There are a number of other problems with the bill, including the broader policing powers it gives to our security agencies, and the lack of accountability or oversight, which are discussed at length in some of the links provided above. At the end of the day, the overriding problem with the Bill is it actually undermines the very freedoms it claims to protect. Among the many things that make Canada such a great place to live is our freedoms: the ability to speak, to ask questions, to criticize our government, and to voice our support for others around the world who are struggling for those same rights. Those rights were hard won, and are the lifeblood of our democratic system. We shouldn't let the terrorists take those rights from us, and we shouldn't let our government take them from us either.